skip to main | skip to sidebar

Jon and I are in Bonn right now, and we will be traveling around Germany and France until July 9. We will be doing lots of eating but not much cooking or blogging. See you in July!
Posted by Evelyn at 7:22 AM No comments:

Email ThisBlogThis!Share to TwitterShare to FacebookShare to Pinterest
Labels: travel 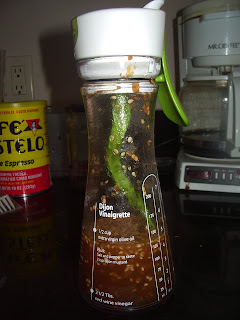 I have been in love with this dressing since the first batch. This was actually the first salad dressing recipe I ever tried. I had picked out several recipes to try and haven't tried any other ones because I like this one so well. Prior to this, we usually just dressed our own salads with oil and vinegar at the table, but since then I have almost always had a jar of this going. It's salty, citrusy, and thick. Plus, it's quite cheap, and you can adjust it to your preferences. This dressing is great on any kind of standard green salad, but it is also good on asparagus, broccoli, noodles, or a spoon. (Just kidding. Kind of.) I was initially reluctant to use it in a salad that had a strong cheese since I associate cheese with Europe and the dressing flavors with Asia and thought that they wouldn't mesh together. I was wrong.

You should taste as you go along and adjust the amount of soy sauce and lemon to your tastes. And believe it or not, generic vegetable oil is the way to go here. The lemon and soy sauce are so powerful that you don't want a strong oil interfering.

Whisk the ingredients together. That's all.
Posted by Evelyn at 11:18 PM No comments: 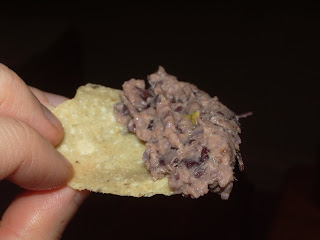 This is a very simple bean dip that gets lots of compliments at parties. It's spicy and has some tang from the lime juice. I like to spread it on a flour tortilla with some sour cream and roasted red peppers and roll it up. Unfortunately, I only got two of those out of this batch before Jon had eaten the rest on nachos.

Spicy black bean dip (from Vegetarian Classics by Jeanne Lemlin):
1 15-oz can black beans, rinsed and drained, or 1 1/2 cups cooked black beans
1 chipotle pepper in adobo sauce (you can add another if you want it hotter)
1 tbsp olive oil (not extra-virgin)
1 clove garlic, peeled and coarsely chopped
Juice of one lime
Salt to taste

Puree all ingredients in a food processor. Add a little salt to taste if desired. If you used canned beans, it will probably not be desired.
Posted by Evelyn at 9:46 AM 2 comments:

A tale of two pizzas

Not much of a recipe here. I just like pizza and want to share two pizzas Jon and I made a while ago. Our dough recipe makes two pizzas' worth of dough, so we usually do two days of pizza at a time. In case you need it, the dough recipe is in this post.
The first pizza starts with an eggplant. An eggplant that we grew on our balcony. 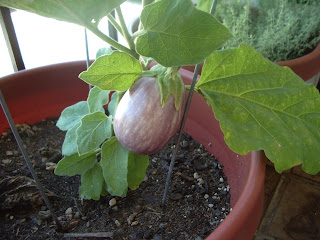 We decided to do an eggplant pizza with mozzarella and tomatoes. The eggplant was small, so we sliced it very thinly to get as much of the pizza covered as possible. The seeds made an angel pattern in the middle of each slice. 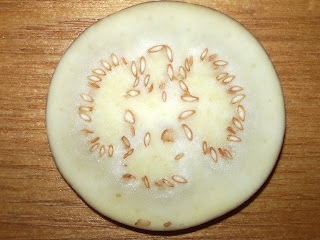 We brushed the eggplant slices on each side with some olive oil and broiled in the toaster oven until they were brown before layering them on the pizza with tomato and mozzarella slices. 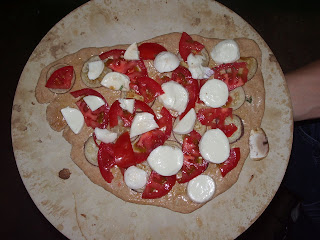 Jon put some mushrooms on his half before it went into the oven. After baking for about 20 minutes, it was done. 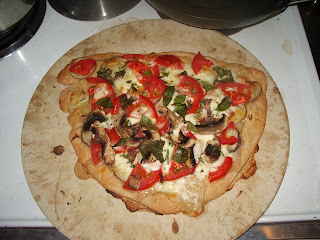 We scattered some basil on it right after it came out of the oven. Yum! The eggplant slices were good, although all the other goodies probably diluted the eggplanty awesomeness.

The next night we had pizza again. This time we wanted to use up some eggplant-tomato sauce I had made earlier in the week. On a whim, Jon suggested putting some kale on top too. It was a brilliant idea! We put it on in the last five minutes or so of cooking. Jon's half, once again, has mushrooms on it. I elected just to go with just sauce, cheese, and kale. Kale dries out very quickly in the oven and gets a nice chewy consistency, with little patches of crunchiness near the curly ends of the leaves. And the flavor is concentrated by the oven. It works very well. 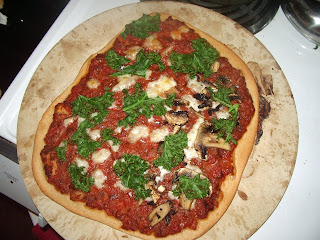 Posted by Evelyn at 4:10 PM No comments: 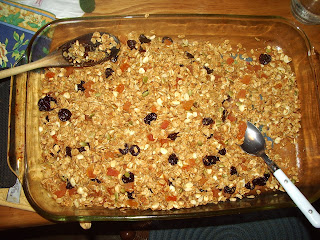 I finally found a granola recipe I really like. It's more a ratio than a recipe, really. Beyond the oats, you can use any liquid sweetener you want and any nuts and fruits you want. I got the recipe from Moosewood Restaurants: New Classics, which has a maple-nut granola recipe in it. Maple syrup is pretty expensive. I used it the first time but found that it wasn't really mapley, so I substituted honey, which is cheaper, for the second batch. I didn't regret it at all. I wanted this batch to feature almonds, and since apricots are related, I thought it would be nice to throw some chopped dried apricots in too. Dried cherries and pumpkin seeds went in because I wanted a little more variety. This is delicious with homemade yogurt in the morning. I will definitely be keeping this in stock. It makes a pretty big batch, so I won't have to be making it constantly, and it keeps indefinitely, as far as I can tell. Plus, there are tons of flavor combinations I want to try. The one warning I have about the recipe is that you can't put it in jars to store until it's completely cooled, and it takes a long time to cool (like over an hour). So if you start it at 10 pm, you might end up staying up later than you intended.

Granola (adapted from Moosewood Restaurants: New Classics):
4 1/2 cups old-fashioned rolled oats (quick-cooking or instant can be substituted but aren't quite as good)
1/4 cup oat bran (optional-gives a fiber boost)
1/3 cup vegetable oil
1/2 cup maple syrup or honey (or agave nectar or corn syrup, I'd imagine)
2 tbsp molasses (not blackstrap)
2 generous cups nuts, seeds, and dried fruit, chopped to whatever size you want it in granola (dried fruit should be kept separate until after cooking)
1-2 tsp spices, if desired (I like it without, but there is cinnamon in the original recipe, and I'm sure nutmeg or cardamom would suit some people)

Combine oats, oat bran, spices, and nuts in a large bowl. In a separate bowl, combine oil, honey or syrup, and molasses and stir vigorously to try to get it rather uniform. Pour liquid into the oat mixture and stir to coat. Pour oats into a large greased baking pan (I use a 9x13 Pyrex) and bake at 350 F for about 20 minutes, stirring every five minutes. When it is golden brown, remove from oven and add the dried fruit. Let it cool completely before storing it in airtight containers in the refrigerator. Stirring periodically will help the heat dissipate and keep the granola from sticking to the pan.
Posted by Evelyn at 2:11 PM 2 comments: 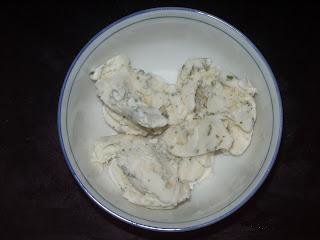 This was Jon's birthday dessert. We had a transcendent mint milkshake at a burger place in New York City in October. It had the grassiness of real mint, unlike a lot of mint flavored products. I have made mint ice cream twice since then, trying to get the same refreshing taste. The first time, I only used mint, cream, milk, and sugar. It was quite good and fresh and grassy, but I wanted it mintier. In this one, I added mint extract, and it's perfect. Both of us really enjoyed it. In case you're curious, I grow three types of mint in my garden: chocolate mint, grapefruit mint, and peppermint. I used a blend of the three. This ice cream is not very sweet. The recipes that came with the ice cream maker usually use 1/2 cup of sugar per pint-ish of ice cream, and I halved it. It just needs a hint of sweetness, in our opinion.


Mint ice cream:
1/2 cup milk (I used whole, but you can use skim or anything in between)
1 cup heavy cream
1/4 cup fresh mint, finely minced
1/4 tsp peppermint extract
1/4 cup sugar 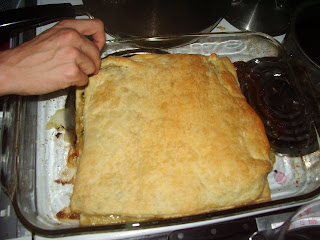 The first time I had spanakopita was at a Greek restaurant outside of Waco, where I went to undergrad. It was love at first bite. Traditionally, it is a phyllo dough pie filled with spinach and feta. One of these days I will overcome my fear of phyllo dough enough to get some and make some real spanakopita. It won't actually be that difficult to work with, and I will feel very silly for my years of not using it. But until then, I feel like puff pastry dough is a good substitute. This is one of Jon's very favorite foods that I make, so I made it for his birthday feast. I actually prefer to make it with red Russian kale instead of spinach, but Jon prefers the spinach. Since it was his birthday, that's what I went with this time. Of course, the time I choose to take a picture of it is the time the kitchen is too hot so the puff pastry starts sticking to itself and doesn't look very attractive. Rest assured that usually this is gorgeous.

Heat the oil in a saute pan over medium heat. Add the onion and garlic and cook, stirring occasionally, for about five minutes. Add the nutmeg and paprika. Smell it. It's good. Throw in the spinach or kale and cover to let it steam/wilt. When it has wilted, add the eggs, one at a time, and scramble into the spinach mixture. Add the cheese, stir to combine, and remove from heat.
Lightly oil a large baking dish (mine is 9x13, but it doesn't have to be that large). Unfold one sheet of puff pastry and place it at the bottom of the dish. Spread the spinach mixture evenly on top. Unfold the other sheet and place on top. If you want to, you can crimp the sides. It's never worked out for me, and I don't care that sometimes the filling leaks out a bit. Bake in a 350 F oven until it's golden brown on top and doesn't have any underdone spots. Start checking around 20 minutes. It varies a lot based on how thawed the puff pastry was and how thick the filling is. I must confess that we often get impatient and eat it before it's all the way done. It's still good that way.
Posted by Evelyn at 12:28 PM No comments: